Protocol is where the core Vector framework is defined. Protocol takes in params via method calls, uses them to make updates to its replicated state with a channel peer, and stores resulting commmitments in store.

Vector Protocol
Protocol is where the core Vector framework is defined. Protocol takes in params via method calls, uses them to make updates to its replicated state with a channel peer, and stores resulting commmitments in store.
Contents:

Vector aims to be an extremely simple state channel protocol. Both parties follow a single flow to make updates:

We use the following design principles:

At the core of Vector lies sync. Unlike other state channel systems, there is only a single protocol -- sync is used both when a sender wants to propose a new update to the replicated state, and also when peer state has diverged. Because updates are monotonic (nonce += 1), there are only a very limited number of cases within which party states possibly diverge.
For this reason, sync takes a higher degree of control over message delivery than other state channel protocols do. Outbound messages are retried on a timer if they fail, inbound ones are idempotent. Higher-nonced inbound messages are checked against the ChannelState latest nonce and dropped if they are duplicates, or saved to store if they aren't.
The protocol can be visualized as follows: 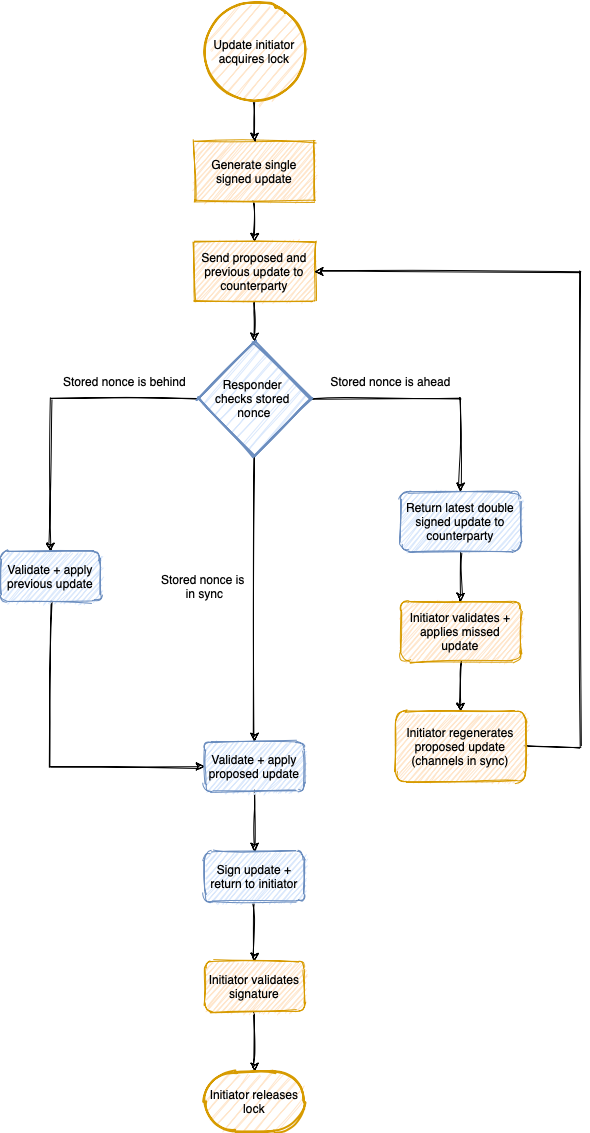 All channel updates fall into one of 4 types. Each update type is responsible for generating and storing one double-signed commitment.
Note that there is no specific update for withdraw. Instead, withdrawals can be constructed in an easy and generalizeable way using create and resolve (see here).

The setup update is responsible for creating a channel commitment at nonce 1 and establishing several channel constants:

An offchain deposit update is designed to reconcile deposits that have been successfully mined onchain (either by calling the depositA function for alice, or simply sending funds to the multisig for bob) with the offchain balance.
To do this safely, the following must occur:

A create update is designed to add a new active conditional transfer into the channel state.
The create update must do the following:

A resolve update should occur when both parties want to remove a conditional transfer from the active transfers, and reintroduce its balances back to the main channel balance.
The resolve update must do the following: