tuProlog (2P henceforth) is a multi-paradigm logic programming framework written in Java.
2P-Kt is a Kotlin-based and multi-platform reboot of 2P. It consists of an open ecosystem for Symbolic Artificial Intelligence (AI). For this reason, 2P-Kt consists of a number of incrementally inter-dependent modules aimed at supporting symbolic manipulation and reasoning in an extensible and flexible way.
A complete overview about modules and their dependencies is provided by the following diagram:

As shown in the project map, 2P-Kt currently focuses on supporting knowledge representation and automatic reasoning through logic programming, by featuring:


The modular, unopinionated architecture of 2P-Kt is deliberately aimed at supporting and encouraging extensions towards other sorts of symbolic AI systems than Prolog---such as ASP, tabled-Prolog, concurrent LP, etc.
Furthermore, 2P-Kt is developed as in pure, multi-platform Kotlin project. This brings two immediate advantages: JS and Android are supported), commit to any particular platform standard library.

2P-Kt can either be used as a command-line program or as a Kotlin, JVM, Android, or JS library.
The 2P-Kt executables are currently available for download on the Releases section of the GitHub repository.
The 2P-Kt modules for JVM, Android, or Kotlin users are currently available for import on Maven Central, under the it.unibo.tuprolog group ID (not to be confused with the it.unibo.alice.tuprolog, which contains the old Java-based implementation). The same modules are available through an ad-hoc Maven repository as well, hosted by GitHub.
The 2P-Kt modules for JS users, are available for import on NPM, under the @tuprolog organization.

If you need a GUI for your Prolog interpreter, you can rely on the 2P-Kt IDE which is available on the Releases section of the GitHub repository.
The page of the latest release of 2P-Kt exposes a number of Assets. There, the one named: is the self-contained, executable Jar containing the 2P-Kt-based Prolog interpreter (VERSION may vary depending on the actual release version).
After you download the 2p-ide-VERSION-redist.jar, you can simply launch it by running: However, if you have properly configured the JVM on your system, it may be sufficient to just double-click on the aforementioned JAR to start the IDE. In any case, running the JAR should make the following window appear: 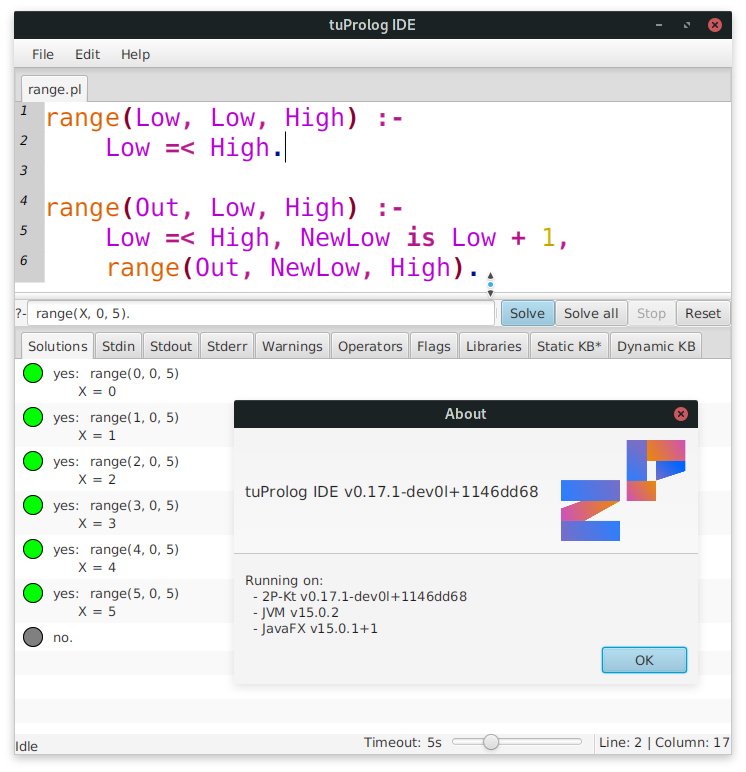 There, one may query the 2P-Kt Prolog interpreter against the currently opened theory file, which can of course be loaded from the user's file system by pressing File and then Open....
To issue a query, the user must write it in the query text field, at the center of the application. By either pressing Enter while the cursor is on the query text field, or by clicking on the Solve (resp. Solve all) button, the user can start a new resolution process, aimed at solving the provided query. Further solutions can be explored by clicking on the Next (resp. All next) button over and over again. The Next (resp. All next) button shall appear in place of Solve (resp. Solve all) if and when further solutions are available for the current query.
One may also compute all the unexplored solutions at once by clicking on the Solve all (resp. All next) button. Avoid this option in case of your query is expected to compute an unlimited amount of solutions.
To perform a novel query, they user may either: (resp. SolveNext) button again.
The Reset button cleans up the status of the solver, clearing any side effect possibly provoked by previous queries (including assertions, retractions, prints, warnings, loading of libraries, operators, or flags).
Finally, users may inspect the current status of the solver by leveraging the many tabs laying at the bottom of the IDE. There,
Any of these tabs may be automatically updated after a solution to some query is computed. Whenever something changes w.r.t. the previous content of the tab, an asterisk will appear close to the tab name, to notify an update in that tab.

If you just need a command-line Prolog interpreter, you can rely on the 2P-Kt REPL which is available on the Releases section of the GitHub repository.
The page of the latest release of 2P-Kt exposes a number of Assets. There, the one named: is the self-contained, executable Jar containing the 2P-Kt-based Prolog interpreter (VERSION may vary depending on the actual release version).
After you download the 2p-repl-VERSION-redist.jar, you can simply launch it by running: This should start an interactive read-eval-print loop accepting Prolog queries. A normal output should be as follows:
For instance: 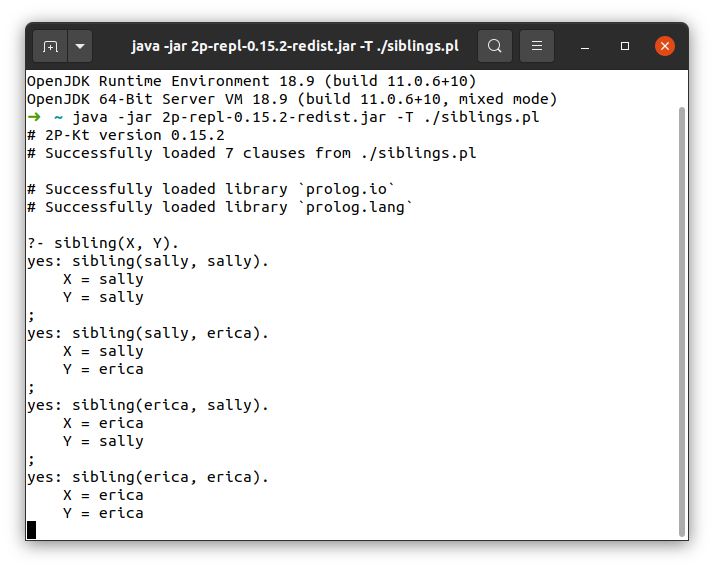 Other options or modes of execution are supported. One can explore them via the program help, which can be displayed by running: This should display a message similar to the following one:

To import the 2P-Kt module named 2P_MODULE (version 2P_VERSION) into your Kotlin-based project leveraging on Gradle, you simply need to declare the corresponding dependency in your build.gradle(.kts) file: ```kotlin // assumes Gradle's Kotlin DSL dependencies {} ``` In this way, the dependencies of 2P_MODULE should be automatically imported.
The step above, requires you to tell Gradle to either use Maven Central or our GitHub repository (or both) as a source for dependency lookup. You can do it as follows: Notice that the JS dependencies of 2P_MODULE should be automatically imported.

Working with the 2P-Kt codebase requires a number of tools to be installed and properly configured on your system:

To participate in the development of 2P-Kt, we suggest the IntelliJ Idea IDE. The free, Community version will be fine.

You will need the Kotlin plugin for IntelliJ Idea. This is usually installed upon Idea's very first setup wizard. However, one may easily late-install such plugin through the IDE's Plugins settings dialog. To open such dialog, use Ctrl+Shift+A, then search for "Plugins"

If a project opens automatically, select "Close project". You should be on the welcome screen of IntelliJ idea, with an aspect similar to this image: Do not select it. Open the folder, and you should find a lowercase 2p-in-kotlin folder. That is the correct project folder, created by git in case you cloned without specifying a different folder name. Once the correct folder has been selected, click Ok

Contributions to this project are welcome. Just some rules:

This will trigger the creation of the artifacts the executions of the tests, the generation of the documentation and of the project reports.

The 2P project leverages on Semantic Versioning (SemVer, henceforth).
In particular, SemVer is enforced by the current Gradle configuration, which features DanySK's Git sensitive SemVer Gradle Plugin. This implies it is strictly forbidden in this project to create tags whose label is not a valid SemVar string.
Notice that the 2P project is still in its initial development stage---as proven by the major number equal to 0 in its version string. According to SemVer, this implies anything may change at any time, as the public API should not be considered stable.

If you meet some problem in using or developing 2P, you are encouraged to signal it through the project "Issues" section on GitHub.