Backbone.Radio provides additional messaging patterns for Backbone applications.
Backbone includes an event system, Backbone.Events, which is an implementation of the publish-subscribe pattern. Pub-sub is by far the most common event pattern in client-side applications, and for good reason: it is incredibly useful. It should also be familiar to web developers in particular, because the DOM relies heavily on pub-sub. Consider, for instance, registering a handler on an element's click event. This isn't so much different than listening to a Model's change event, as both of these situations are using pub-sub.
Backbone.Radio adds two additional messaging-related features. The first is Requests, an implementation of the request-reply pattern. Request-reply should also be familiar to web developers, as it's the messaging pattern that backs HTTP communications. The other feature are Channels: explicit namespaces to your communications.

Clone this repository or install via Bower or npm.

You must also ensure that Backbone.Radio's dependencies on Underscore (or Lodash) and Backbone are installed.

Anyone who has used Backbone should be quite familiar with Backbone.Events. Backbone.Events is what facilitates communications between objects in your application. The quintessential example of this is listening in on a Model's change event.

Let's look at a diagram for Backbone.Events: 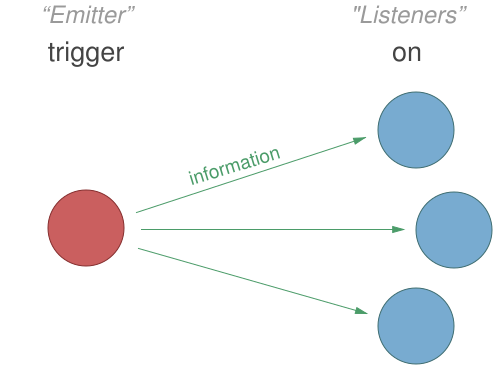 It goes without saying that Backbone.Events is incredibly useful when you mix it into instances of Classes. But what if you had a standalone Object with an instance of Backbone.Events on it? This gives you a powerful message bus to utilize.

As long as there was an easy way to access this message bus throughout your entire application, then you would have a central place to store a collection of events. This is the idea behind Channels. But before we go more into that, let's take a look at Requests.

Requests is similar to Events in that it's another event system. And it has a similar API, too. For this reason, you could mix it into an object.

Although this works, I wouldn't recommend it. Requests are most useful, I think, when they're used with a Channel.
Perhaps the biggest difference between Events and Requests is that Requests have intention. Unlike Events, which notify nothing in particular about an occurrence, Requests are asking for a very specific thing to occur. As a consequence of this, requests are 'one-to-one,' which means that you cannot have multiple 'listeners' to a single request.
Let's look at a basic example.

The handler in reply can either return a flat value, like true or false, or a function to be executed. Either way, the value is sent back to the requester.
Here's a diagram of the Requests pattern: 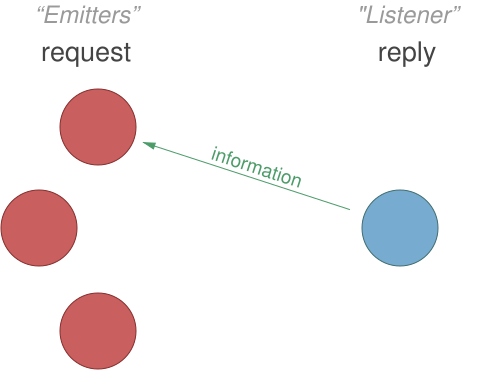 Although the name is 'Requests,' you can just as easily request information as you can request that an action be completed. Just like HTTP, where you can both make GET requests for information, or DELETE requests to order than a resource be deleted, Requests can be used for a variety of purposes.
One thing to note is that this pattern is identical to a simple method call. One can just as easily rewrite the above example as:

This is why mixing Requests into something like a View or Model does not make much sense. If you have access to the View or Model, then you might as well just use methods.

The real draw of Backbone.Radio are Channels. A Channel is simply an object that has Backbone.Events and Radio.Requests mixed into it: it's a standalone message bus comprised of both systems.
Getting a handle of a Channel is easy.

Once you've got a channel, you can attach handlers to it.

You can also use the 'trigger' methods on the Channel.

You can have as many channels as you'd like

The whole point of Channels is that they provide a way to explicitly namespace events in your application, and a means to easily access any of those namespaces.

Marionette does not use Radio by default, although it will in the next major release: v3. However, you can use Radio today by including a small shim after you load Marionette, but before you load your application's code. To get the shim, refer to this Gist.

Like Backbone.Events, all of the following methods support both the object-syntax and space-separated syntax. For the sake of brevity, I only provide examples for these alternate syntaxes in the most common use cases.

Make a request for requestName. Optionally pass arguments to send along to the callback. Returns the reply, if one exists. If there is no reply registered then undefined will be returned.
You can make multiple requests at once by using the space-separated syntax.

When using the space-separated syntax, the responses will be returned to you as an object, where the keys are the name of the request, and the values are the replies.

Register a handler for requestName on this object. callback will be executed whenever the request is made. Optionally pass a context for the callback, defaulting to this.
To register a default handler for Requests use the default requestName. The unhandled requestName will be passed as the first argument.

To register multiple requests at once you may also pass in a hash.

Returns the instance of Requests.

Register a handler for requestName that will only be called a single time.
Like reply, you may also pass a hash of replies to register many at once. Refer to the reply documentation above for an example.
Returns the instance of Requests.

The name of the channel.

Destroy all handlers from Backbone.Events and Radio.Requests from the channel. Returns the channel.

Get a reference to a channel by name. If a name is not provided an Error will be thrown.

This is a Boolean property. Setting it to true will cause console warnings to be issued whenever you interact with a request that isn't registered. This is useful in development when you want to ensure that you've got your event names in order.

A function executed whenever an unregistered request is interacted with on a Channel. Only called when DEBUG is set to true. By overriding this you could, for instance, make unhandled events throw Errors.
The warning is a string describing the type of problem, such as:

Attempted to remove the unregistered request

while the eventName and channelName are what you would expect.

Tuning into a Channel is another useful tool for debugging. It passes all triggers and requests made on the channel to
Radio.log. Returns Backbone.Radio.

Once you're done tuning in you can call tuneOut to stop the logging. Returns Backbone.Radio.

When tuned into a Channel, this method will be called for all activity on a channel. The default implementation is to console.log the following message:

where args are all of the arguments passed with the message. It is exposed so that you may overwrite it with your own logging message if you wish.

If you'd like to execute a method on a channel, yet you don't need to keep a handle of the channel around, you can do so with the proxy functions directly on the Backbone.Radio object.

All of the methods for both messaging systems are available from the top-level API.

You can also reset a single channel, or all Channels, from the Radio object directly. Pass a channelName to reset just that specific channel, or call the method without any arguments to reset every channel.