This node will monitor the CPU usage, based on the Node.js OS Library.
An example flow:

Simon Hailes adviced me to add this option, since the graphs per core can become too noisy. For example, from following graph you might conclude (incorrectly!) that video processing (using the OpenCv library) uses nicely all 4 cores of a Raspberry Pi: 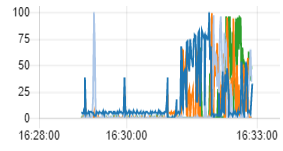 However when looking at the overall CPU usage, it becomes clear that only 25% of the Raspberry Pi CPU resources is being used:

This means that the library uses all 4 available cores, but in total only 25% of the 4 cores...
There will be a single output message, containing the overall data of all cores:

Separate output message for each core

When this option is selected, an output message will be generated for each core individually. Since every core gets it's own topic (corexxx), it becomes very easy to display all the cores in a single graph on the dashboard: 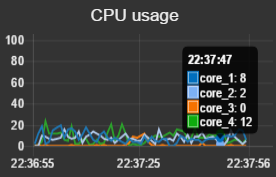 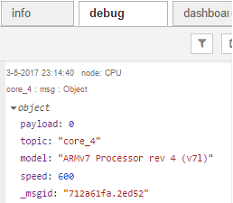 When this option is selected, a single output message will be generated that contains an array of all CPU usages (with topic 'allcores').

When this option is selected, a single output message will be generated that contains the temperature values in °C (with topic 'temperature').

The output message will look like this:
CAUTION: the temperature values are not available on all systems (e.g. on Sun systems)! And on some systems the msg.cores array will be empty (e.g. on Raspberry Pi 3), but instead the main temperature might be available.

As mentioned before, data will be outputted for every core. However what does a core represent?
In case of a system with N processors (and M cores in each processor), the total number of physical cores in the graph will be NxM.
However sometimes we will get much more virtual cores on the output (compared to the number of physical cores). This could be the case for example with processors that support Hyper threading.

This node can be used to detect performance issues easily, without having to install extra third-party tools.
As a starting point (to compare your own CPU usage graph), a basic Node-Red flow uses very few core resources (except from the deploy period): 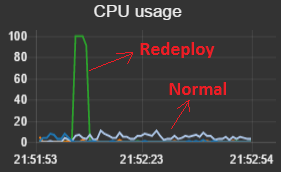